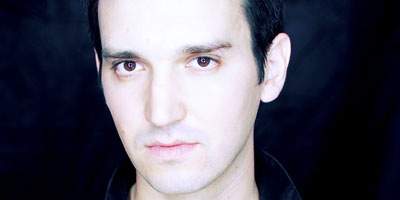 Lionel Ginoux studied the visual arts (film, audiovisual, sound engineer) before devoting himself to writing music in forming alongside Régis Campo, Barnabé Janin, David Owen, Roger Cawkwell, Georges Boeuf… He writes lyrical and sensitive music, with a strong preoccupation on rythm and musical intensity. His compositions follow the contemporary music of the twentieth century, without disowning the vocality and the classical harmony. By his musical curiosity, his music is being inspired too by jazz and popular music. He writes mainly for symphony orchestra, choir, opera, chamber music and soloists.

In 2012, Lionel Ginoux is laureate of the SACD Beaumarchais for his chamber opera, Medea Kali, created in may 2013. He is also laureate in 2015 of the Marcelle and Robert de Lacour’s Fondation for his work, the Diptyque entourant la caresse for harpsichord and instrumental ensemble, a score created by the Stravinsky’s Ensemble (cond. by Jean-Pierre Pinet) at the Arsenal de Metz in november 2017.

Lionel Ginoux has repeatedly been in residence at the Chartreuse de Villeneuve-lez-Avignon, in 2009 for Preface en Prose and in 2012 for Medea Kali (libretto by Laurent Gaudé). The Abbaye de Fontevraud host him too in residence for his chamber opera, Vanda,  (libretto by Jean-Pierre Siméon).

In March 2014, his concerto for violin, Les Indociles, has been created by Nemanja Radulovic with the Marseille Philharmonic Orchestra, directed by Eun Sun Kim. Few years after, his first Symphony – Dualités, inspired by the Sidi Larbi Cherkaoui’s choreography, has been created in January 2016 by the Avignon Symphony Orchestra (cond. by Samuel Jean). Lionel has also created his second chamber opera, Vanda at the Reims Opera House, which will be performed in April 2018 at the Avignon Opera house.

In april 2018, cellist Emmanuelle Bertrand created his piece War is kind for women’s choir and cello at the Saint-Victor Abbey.

In his next projects : his 3rd symphony for symphonic orchestra, commissionned by the Toulon Opera House, premiere on february 2020 and Eugénia an opera according to the play « Actrice » by Pascal Rambert.