Strength, simplicity, emotion, contrast, are words that guide me in my work as a composer. The questioning of our world today is something that passionate me. In 2004, I began research on texts of the highlights of the twentieth century, and still current. I discovered the poetry of Benjamin Fondane. From the first sentence, I was fascinated by his writing, by the beauty and simplicity of words, by the force and the universality of its images. I am struck by his thought, a particular form of rebellion and reflection on evil, a philosophy of “irrésignation”. This text bring us a reflection on rights, on what will or will not the XXI century. This musical work has become for me a personal reflection and work on the memory of past events but also a way to keep an active eye on the present.

Musically, the work is built in four periods. The first is based on the sounds of the earth (bows rubbing, breath, whispered chorus). In the second and third, melodic phrases, rhythms, timbres are growing up and collide chaos. The last period, with its long held notes and voice of the narrator, goes to infinity: it is the memory and the memory of our life. 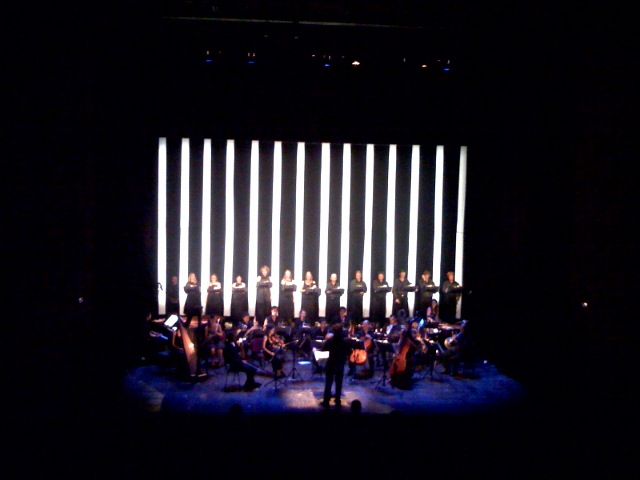 A successful for this Premiere in Marseille for Preface en prose, work of the young composer Lionel Ginoux at the Minoterie.
The so-called classical music is not always one or two centuries old. It is still composed today, and is even played in concert … Certainly one no longer writes like Mozart and yet the actors of this artistic renewal also have talent, and need to be recognized as musicians of today, just as “actual” as those of other musics … Lionel Ginoux is one of these talented artists and the Marseille creation of Preface en Prose for mixed chorus, chamber orchestra and narrator will not make us lie. The C Barré ensemble, the choir Pyramidion and the young and dynamic leader Sébastien Boin, all the protagonists put their qualities at the service of a rich and constructed music. On moving texts of the Romanian Jewish poet Benjamin Fondane, relayed finely by the narrator Sacha Saille, space is built and then deconstructed. The orchestral and vocal treatment (the harp strings rubbed sometimes with the brush, the noise of the breath in the woods or the friction of the newspaper) gives a shimmering dimension to the alloys of confusing timbres. The maturity of writing is largely perceptible, in the unity and meaning of the work, matter and emotion. An opus greeted with fervor by an audience conquered in a crowded room. (…)
Frédéric Isoletta

The ode to memory, by Lionel Ginoux

Working on it during trhee yeras. His first major musical composition. 40 minutes – its duration – this may seem modest. But, for a young composer of contemporary music, this is an important step.
At 31 years old, Lionel Ginoux signed with Preface en prose an intense, complex and demanding work. After a fruitful one week residence, his score was born at the end of August at the Chartreuse de Villeneuve-lez-Avignon. A highlight for the young man and thirty musicians associated on the project: Ensemble C Barré? led by his longtime accomplice, Sébastien Boin, and the chamber choir Pyramidion, brought from Grasse by Pascal Denoyer. It is a fine tribute to Benjamin Fondane, a great Romanian writer who was deported and then murdered in Auschwitz in 1944. According to his eponymous text, Lionel Ginoux offers a music composed of intimate moments and meticulous lyrical flights. Voices and instruments respond with a virtuosity that forces admiration, supported by the breath of the reciter, Sacha Saille.
This piece, this evening, opens the new season of the Theater de la Minoterie. As in the Chartreuse, it will be preceded by the cantata Gegen den Krieg, composed in 1936 by Hanns Eisler on a text by Brecht. It will be easily understood, a program under the sign of memory and commitment.
Patrick Merle